Joined Apr 9, 2011
·
6 Posts
So, the introduction of the car in October called out LED daytime running lights and LED taillights.

I love this car. I have tried to get the DRL activated through the dealer and they state the car is "not equipped" with DRL. I know there are some web postings about "fleet" and having DRL available as a $40 option.

I tried to talk to dealer that for $40 Chrysler is not swapping out equipment, sounds like a configuration or set-up. In Canada, DRLs are required by law.

No luck to date understanding if the front LEDs in the fascia could be activiated as DRLs...........even called Chrysler after a survey completion and supposedly they checked with "technical support" and the answer was the same as the dealer. The car is not equipped.

I think this would really give the car an extra great look as well as the safety aspects other than running the parking lights all day long.

Anyone look into this topic? Anyone have success on this topic or is there a Canada owner that can comment?
N

Joined Apr 2, 2011
·
111 Posts
I figured there was a secret switch somewhere. Lacking that, a way to hack it electronically. Has to be.

Joined Mar 31, 2011
·
72 Posts
You would think that the ECU would control that. I will get with the Chrysler team here in Seoul to see if that is the case. Does not make much sence that it would be an add on package when the ECU controls all aspects of the vehicle and it would not be financially feasible to make DRL a separate package for all of the different regions. Chrysler is much smarter than that. It must be a simple adding of a fuse and/or relay along with an ECU switch. My Chrysler is the US version 200 Limited.
P

Joined Apr 9, 2011
·
6 Posts
You are thinking like I am.........just got a reply from my salesman at the dealership who had spent 2 or 3 days with supposedly some top technicians from Chrylser. Response was they knew nothing about DRLs on the 200 other than the Canada builds come with DRL activated. Salesman also confirmed that as of today, still no option to order that option in the dealer system. Never consider checking the fuse set-up. I will have to check that out. There is also a lot of preview information on the convertible noting the LED DRLs and the TV ad that runs clearly has them active - no parking side markers in the commercial, just the LEDs.......?

Joined Feb 28, 2011
·
50 Posts
to be honest I think the LEDS as DRLs would be pointless on sunny days you can hardly see them they arent like the LEDs found on Audis
V

I live in a Canada and the only reason why we have DRL is so you can be "seen" but in broad daylight i do not understand how you can miss a car , i mean these things arnt exactly hard to see, but according to Canada we need DRL's so we can be seen, but its just complete waste.

As for LED DRL's its just a styling cue, drl's are just useless !
P

Joined Apr 9, 2011
·
6 Posts
Yes, I don't necessarily buy into the safety aspects of the DRLs, but in this case, clearly the car is presented in advertising and in the introductions into the market with LED DRLs and I believe the styling look is good if Chrysler could deliver..............but to date, the ads and intro do not match the true offering as of today..........
X 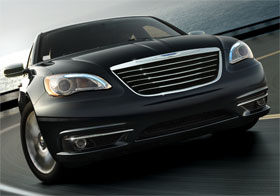 Joined Feb 28, 2011
·
50 Posts
good lord isnt it just possible they are driving in the pictures with the parking lights on?
X

Black200 said:
good lord isnt it just possible they are driving in the pictures with the parking lights on?
Click to expand...

Joined Apr 9, 2011
·
6 Posts
On Saturday, had to take the car in for the "check engine light", and it was really not a issue, just had to have the software on the car flashed. I directly spoke to the technician about setting the DRLs and what needed to be done. 1st step is to set the country code to "Canada" to allow the enablement of the DRLs. He was told strictlyby his dealership that he was not authorized to do the change?
T

Joined Jun 16, 2011
·
25 Posts
I am wondering if you can shut the LED's off idependently from the headlamps? While the LED's are nice and the ladies think it's cool, sometimes I don't need all the glitter! I wish I could drive with just the running lamps and headlamps lit. You can see this combination after unlocking the doors as they light your way. Anybody have ideas how to turn off the LED's while still haveing the parking (side marker) and headlamps lit?

FYI...concerning the pictures showing just the LED's illuminated. It's possible they got the effect by flash photography which reflects off the LED's making them appear to be on. I did this with my pics.
H

JamesB. said:
FYI...concerning the pictures showing just the LED's illuminated. It's possible they got the effect by flash photography which reflects off the LED's making them appear to be on. I did this with my pics.
Click to expand...

When I remote crank the car at night, it has only the LED on.
P

Joined Apr 9, 2011
·
6 Posts
OK, so third attempt with the dealer today since I was there fora check engine light, and after speaking to the service manager, the DRL's are activiated. They are the turn signal bulbs and do not include the LED trim of the headlight assembly. FYI...........

Joined Jul 6, 2011
·
450 Posts
I have learned that on my car, if the headlight switch is left in the "Automatic" position, and the instrument panel lights are on the brightest setting, (but not so the interior lights are on) the headlights will come on and stay on in a reduced intensity state during day light. No tail lights in this condition. They will come on full bright as day light fades. My car was built in May, so I wonder if they made some changes.
J

I have a 200 Touring with DRL. The vehicle was built especially for FLEET. Although the car has parts content from both U.S., Canada and Mexico – the final assembly point is listed as Sterling Heights, Mich.


This FLEET version is equipped with a $40.00 option listed as: “Daytime Running Lamps Park/Turn.”


If I turn the parking lights on – the Amber DRL's will stay on - plus the Light Tubes illuminate. The rear and side markers will also illuminate.


If I turn the headlights on – the Amber DRL's go off – but all other lights are on, including the Light Tubes.


When I use the turn signals with headlights off – the Amber DRL's will flash on to indicate the turn, then return to steady light when the signal is off.


With the headlights on, the Amber turn signals will flash on the return to dark when the signal is off.


I have not looked for the relay that allows this option. I do not know if it would be under the hood or under the dash.


I like this option very much and consider it not only an attractive feature – but a good safety measure.


I know that it has already gotten attention is the short time I've driven the car. There have been several times while in parking lots or 4 way stops – that the car has received long stares from other drivers. At least one time, a driver stopped suddenly as he was clipping through a busy, crowed parking lot. I saw him in plenty of time – but he did not see me – until he saw the front of my car. Then he slowed to a crawl realizing that he was going too fast for conditions.
1 - 20 of 63 Posts
Join the discussion
Continue with Facebook
Continue with Google
or sign up with email
About this Discussion
62 Replies
39 Participants
Last post:
Dr.Gonzo228 Nov 10, 2018
Chrysler 200 Forum
We’re a forum community dedicated to Chrysler 200 owners & enthusiasts. Come join the discussion about reviews, maintenance, upgrades, and more!
Full Forum Listing
Explore Our Forums
Chrysler 200 General Discussion Forum General Discussion Chrysler 200 Engine and Technical Discussion 2015-2016 Chrysler 200 UF Engine, Tech Discussion Chrysler 200 Appearance and Body
Popular Communities